There is water like a river, clearly intended for Acheron, with reeds growing in it; the forms of the fishes appear so dim that you will take them to be shadows rather than fish. On the river is a boat, with the ferryman at the oars.

Higher upthan the figures I have enumerated comes Eurynomus, said by the Delphian guides to be one of the demons in Hades. But Homer's Odyssey, the poem called the Minyad, and the Returns, although they tell of Hades, and its horrors, know of no demoncalled Eurynomus. However, I will describe what he is like and his attitude in the painting. He is of a color between blue and black, like that of meat flies;he is showing his teeth and is seated, and under him is spread a vulture's skin. 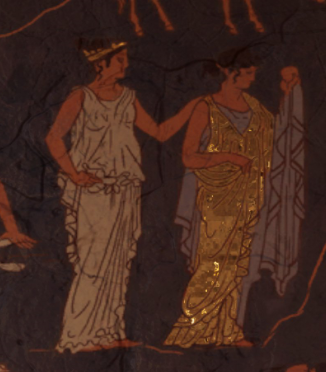 Next after Eurynomus are Auge of Arcadia and Iphimedeia. Auge visited the house of Teuthras in Mysia, and of all the women with whom Heracles is said to have mated, none gave birth to a son more likehis father than she did. Great honors are paid to Iphimedeia by the Carians in Mylasa. 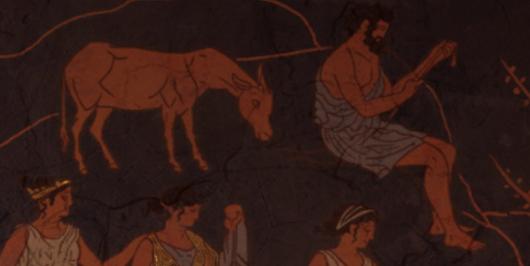 After them is a man seated, said by the inscription to be Ocnus (Sloth). He is depicted as plaiting a cord, and by him stands a, eating up the cord as quickly as it is plaited. They say that this Ocnus was a diligent man with an extravagant wife. Everything he earned by working was quickly spent by his wife.

Tityos toois in the picture; he is no longer being punished, but has been reduced to nothing by continuous torture, an indistinct and mutilated phantom. 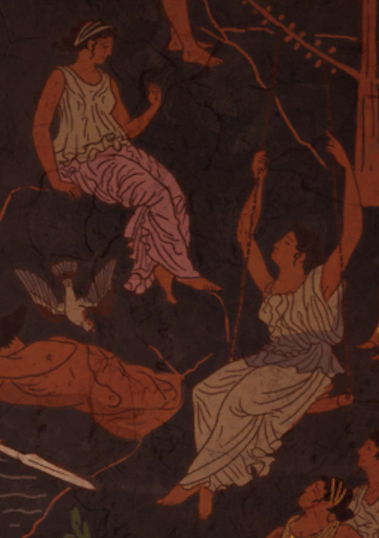 Going on to the next part of the picture, you see very near to the man who is twisting therope a painting of Ariadne. Seated on a rock she is looking at hersister Phaedra, who is on a swing grasping in either hand the rope on each side. The attitude, though quite gracefully drawn, makes us infer the manner of Phaedra's death. 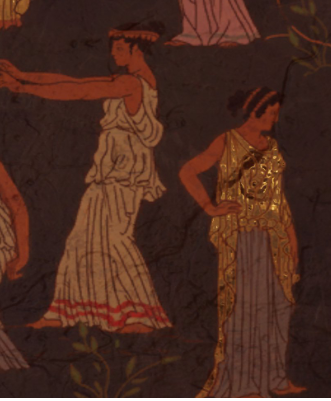 Beside Thyia stands Procris, the daughter of Erechtheus, and afterher Clymene, who is turning her back to Chloris. The poem the Returns says that Clymene was a daughter of Minyas, that she married Cephalus the son of Deion, and that a son Iphiclus wasborn to them. The story of Procris is told by allmen,how she had married Cephalus before Clymene, and in what way she was putto death by her husband. 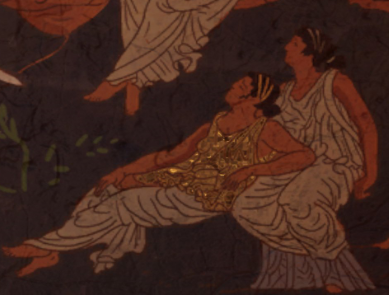 Underneath Phaedra is Chloris leaning against the knees of Thyia. He will not be mistaken who says that all during the lives of these women they remained friends. For Chloris came from Orchomenus in Boeotia, and the other was a daughter of Castalius from Parnassus. Other authorities have told their history, how that Thyia had connection with Poseidon, and how Chloris wedded Neleus, son of Poseidon.

Farther within from Clymene you will see Megara from Thebes. This Megara married Heracles, but was divorced by him in course of time, on the ground that he had lost the children he had by her, and so thought that his marriage with her was unlucky. 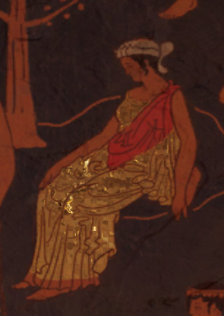 Beside whom is standing Eriphyle, who is holding up the ends of her fingers along her neck through her tunic, and you will conjecture that in the folds of her tunic sheis holding in one of her hands the famous necklace.

Beyond Eriphyle have been painted Elpenor and Odysseus. The latter is squatting on hisfeet, and holding his sword over the trench, towards which the seer Teiresiasis advancing. After Teiresias is Anticleia, the mother of Odysseus, upon arock. Elpenor has on instead of clothes a mat, such as is usual for sailors towear.

Lower downthan Odysseus are Theseus and Peirithous sitting upon chairs. The former is holding in his hands the sword of Peirithous and his own. Peirithous is looking at the swords, and you might conjecture that he is angry with them for having been useless and of no help in their daring adventures. Panyassis the poet says that Theseus and Peirithous did not sit chained to their chairs, but that the rock grew to their flesh and so served as chains.

Polygnotus has painted them as girls crowned with flowers and playing with dice, and gives them the names of Cameiro and Clytie. I must tell you that Pandareos was a Milesian from Miletus in Crete, andimplicated in the theft of Tantalus and in the trick of the oath. 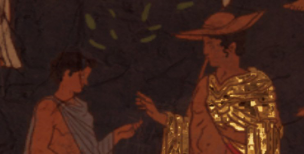 Beyond them has been painted Phocus as a stripling, and Iaseus, well bearded, is taking off a ring from the left hand of Phocus. The story about this is as follows. When Phocus, the son of Aeacus, had crossed from Aegina into what is now called Phocis, and wished to gain the rule over the men livingon that part of the mainland, and to settle there himself, Iaseus conceived agreat friendship for him. Among the gifts that Iaseus gave (as friends will) was asealring, a stone set in gold. But when Phocus returned, not long afterwards, to Aegina, Peleus at once plotted to kill him. This is the reason why in the painting, as a reminder of their great friendship, Iaseus is anxious to look at the ring and Phocus has let him take it. 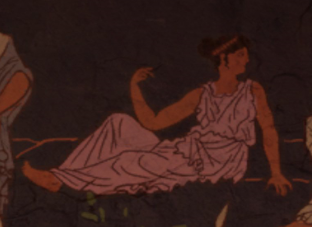 Beyond these is Maera sitting on a rock. About her the poem Returns says that she was still a maid when she departed this life, being the daughter of Proetus, son of Thersander, who was a son of Sisyphus. 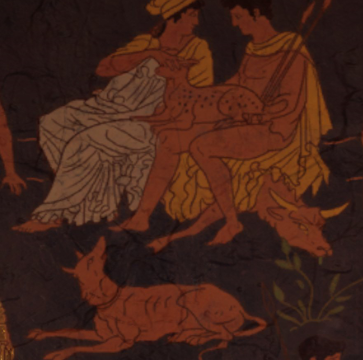 Next to Maera is Actaeon, son of Aristaeus, together with the mother of Actaeon; they hold in their hands a young deer, and are sitting on a deer's skin. A hunting dog lies stretched out beside them, an allusion to Actaeon's mode of life, andto the manner of his death.